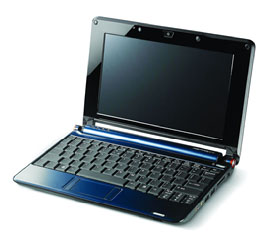 Netbook computers seemed like such a good idea: low-cost, compact, portable computers with good battery life and enough power for common tasks. At first sales took off reasonably well, but we can now see it was a cycle of rise and fall. Why did they ultimately fail?

I think the answer may be best illustrated with an anecdote: When updating a typical netbook that hadn't been used in about 9 months, it took over two hours to apply the accumlated Windows XP patches, and another hour to update applications. And that was by an expert. Simple tasks like populating the Add/Remove Programs window that should have taken seconds instead took many agonizing minutes. It's just too painful to endure. The value proposition just isn't there.

But that's not the fault of the netbook -- it's the fault of Windows, which takes way too much maintenance and tweaking, and which needs much more powerful hardware to run decently!

But there is hope for the machine: Chromium OS Vanilla, the open source development version of Google Chrome OS, "a lightweight, lightning-fast operating system for your netbook, laptop or even desktop. With the familiar environment of Chromium/Chrome, the entire web is at your fingertips in seconds. HTML5 is fully supported, allowing you to enjoy the very best that the web has to offer." It has the potential to turn the netbook into a speedier, easier to maintain Chromebook. Stay tuned!
Posted by John Navas at 12:47 PM

Email ThisBlogThis!Share to TwitterShare to FacebookShare to Pinterest
Labels: Chrome, How To, Laptops-Notebooks-Netbooks, Windows