Chromebook Pixel: close, but no cigar 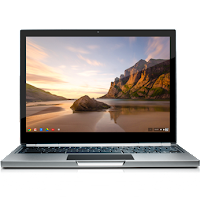 The Google Chromebook Pixel is presumably meant to be the best that a Chromebook can be, and while it is an attractive package with a killer screen, it has a number of flaws that just don't belong in a premium-priced machine:


9. Bluetooth: 3.0 is adequate, but it should have been 4.0 for the advances in power conservation (battery life).

8. DisplayPort: DisplayPort is adequate, but HDMI would have made more sense.

7. Storage: 32GB isn't enough for a premium machine; 64GB should have been the minimum.

6. Memory: 4GB isn't enough for effectively managing many open tabs; 8GB should have been included.

4. Gloss: Glare is a problem on the glossy screen; should have been non-glare.

3. Weight: At 3.35 lbs it's about a pound heavier than it should be, almost as heavy as a light notebook computer.

1. Battery: 4 hours of typical use just doesn't cut it, needs to be 8 hours (at least double).

As the saying goes, "Never buy version 1.0!" And Chromebook Pixel is no exception. Perhaps Google will get it right with version 2.0.
Posted by John Navas at 2:37 PM