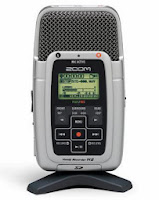 When my video needs high fidelity audio, I normally use the compact Zoom H2 recorder, selecting microphone pattern and adjusting level with the built-in meter to fit the particular acoustic environment. I place the H2 as close as possible to the audio source.

I typically record WAV-48kHz-16bit. While the H2 is capable of 24bit recording, I've not found a significant difference over 16bit recording in carefully controlled tests, and 96kHz is only needed for critical mastering.

When I convert for YouTube, I encode video with AAC audio at a variable bitrate of 192 Kbps.
Posted by John Navas at 12:20 PM