A Tale of Two Locks 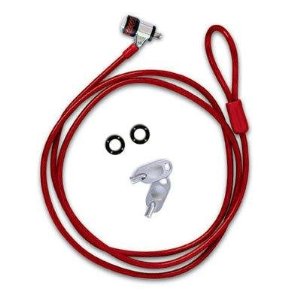 Leave your computer unguarded for a moment in a coffee place and it might be gone when you get back (including all your data), and even when you're there, it might still get snatched. To keep that from happening, you should get a lock to secure it. While nothing will stop a skillful thief with time and opportunity, the better cable locks will deter most thieves. But you need to choose your lock with care, because there are big differences in performance.

Arguably the best locks are by PC Guardian, with secure locking mechanisms, rotating and swiveling cable attachment to resist prying, and tough cables that are hard to cut. I particularly like the red cable version because it is more likely to be noticed in advance and deter a thief from even trying. Unfortunately, PC Guardian no longer makes these locks, although it's still possible as of this writing to find them for sale online. The next best bet is the Kensington Microsaver, which is relatively easy to find. 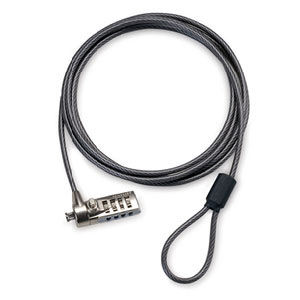 One of the most widely available locks is the Targus DEFCON CL (PA410U), also attractive because it's less expensive. However, it has a big deficiency: the combination dials can slip and change the combination while it is being locked, so it won't unlock with the combination you have set, which can be a huge problem. When this happens, Targus has no solution other than either (a) cutting off lock with a hacksaw or (b) trying all possible (10,000) combinations.

I'm not guessing this — it happened to me! And in the process of dealing with the problem I discovered the DEFCON CL has an even bigger deficiency — it's easy to pick! When you press the unlocking pin, any cylinder not in the unlock position will deflect (move) slightly in the same direction, making it a simple matter to rotate the cylinders in turn until they don't deflect. It took me less than 5 minutes to figure this out and unlock my computer despite the changed combination. I estimate a knowledgeable thief could do it in 1-2 minutes while not even looking suspicious. Thus I rate the DEFCON CL unacceptable.

(With apologies to Charles Dickens and Sergio Leone.)